This page shows you how to set up the Coral Dev Board Micro, a microcontroller board that can run TensorFlow Lite models with acceleration on the Coral Edge TPU. With its on-board camera and microphone, this board provides a complete system for embedded machine learning (ML) applications.

Even if you have no experience with microcontrollers, this page explains everything you need to know so you can compile applications and run them on the Dev Board Micro. 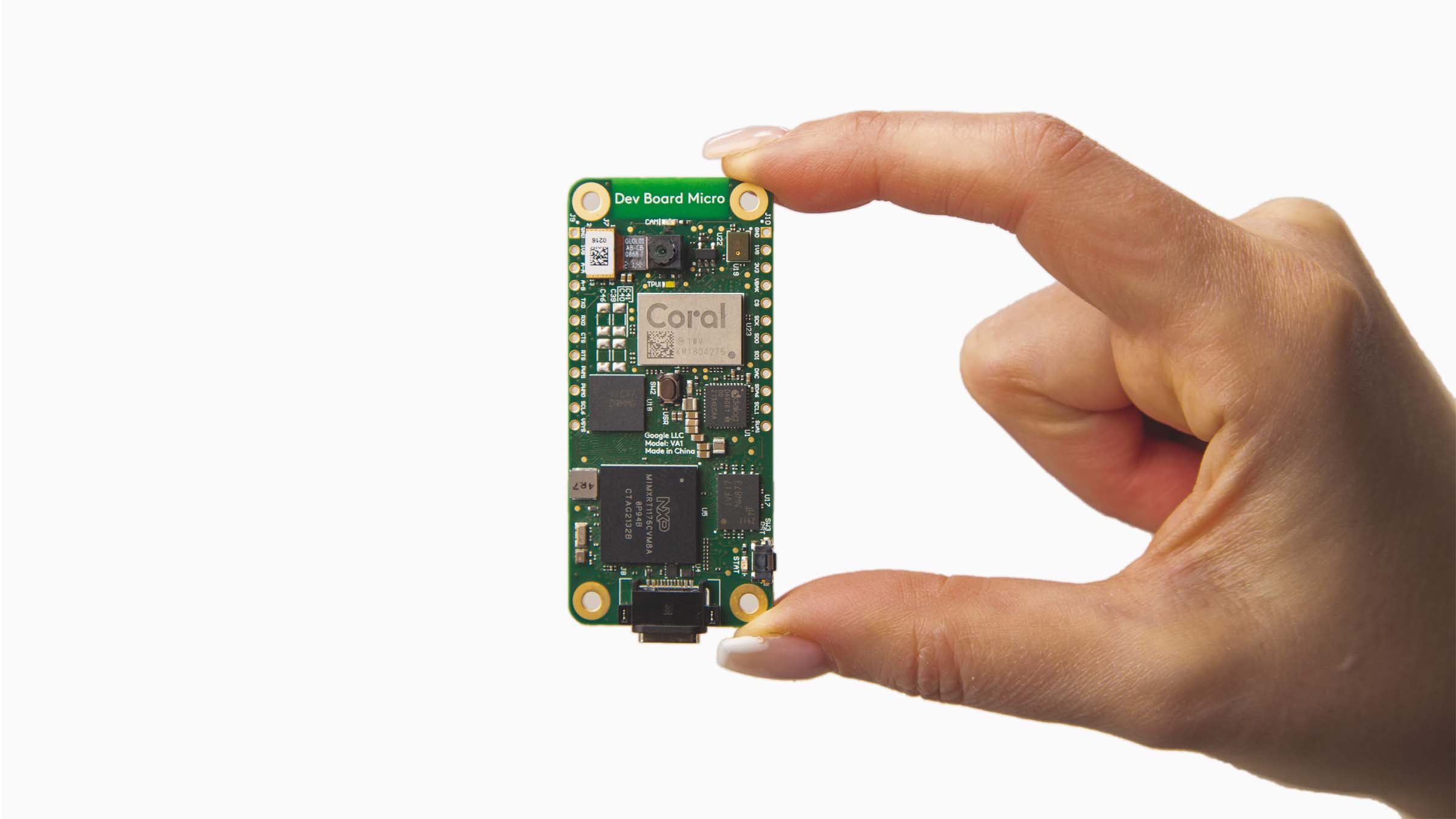 Although not required for this setup, you should also get a set of header pins that can be soldered onto the board and a USB-to-TTL serial cable (such as this one by Adafruit) so you can connect to the board's serial console.

Note: The Dev Board Micro requires a DC power supply that can deliver 5 V at 2 A. Most computers can power the board just fine with USB, and many applications operate at much lower currents. However, the Edge TPU can produce significant power spikes during inferencing, so if you notice that your computer cannot deliver sufficient power via USB, you should connect the board through a powered USB hub.

2. Get to know the board

Before you get started, let's review the Dev Board Micro hardware and software platform.

Aside from the Coral Edge TPU coprocessor for accelerating TensorFlow Lite models, the Dev Board Micro includes the following processor and memory:

As shown in figure 1, the board includes the following hardware components:

For more hardware details, see the Dev Board Micro datasheet.

Because the main processor is a microcontroller (MCU), the Dev Board Micro runs small programs without a general-purpose operating system (there's no Linux OS like on other Coral boards). The platform we've built for Dev Board Micro is based on FreeRTOS and we also offer compatibility with Arduino. (Alternatively, you can write bare-metal apps with the MCUXpresso SDK, but our documentation covers only FreeRTOS and Arduino.)

All apps are written in C/C++ and the coralmicro API library provides a variety of APIs to help you build apps for the Dev Board Micro. For example, it includes APIs to use the on-board camera, microphone, and GPIO pins, plus APIs to read/write files, pass messages between the two MCU cores, connect to Wi-Fi (requires the Coral Wireless Add-on board), and much more.

As for running ML models, you can execute TensorFlow Lite models either on the MCU or with acceleration on the Edge TPU, using TensorFlow Lite for Microcontrollers (TFLM). The coralmicro library also provides APIs to simplify a lot of this code for you.

Now let's run some ML models on the board.

3. Boot up for the first time

The Dev Board Micro arrives in the box with a person detection app installed. So let's give it a try:

Caution: Some board components can become hot during operation and might burn you if touched. When handling the board, always hold it by the edges. For additional protection, consider using a case.

This person detection model is extremely small (300 Kb) and it runs entirely on the Cortex-M7 MCU (it does not use the Edge TPU). Its accuracy is limited due to this small size, but it's still very effective, especially when the input image is simple (such as a person against a white background).

This is a good demonstration of what's possible with the MCU alone, but we also offer more powerful models that run on the Edge TPU. So let's set up your development environment so you can flash the board with some other examples.

4. Set up for FreeRTOS development

Note: FreeRTOS is our primary application framework for the Dev Board Micro, but you can also build apps using Arduino.

To start building apps with FreeRTOS, you need to download the Dev Board Micro source code and install some dependencies, as follows:

The coralmicro repo includes a variety of code examples for you to try. Let's start with the face detection example, which runs a MobileNet face detection model on the Edge TPU:

Now let's make a code change and rebuild the app:

When flashing is done and the app starts, notice that the face detection model now works only when you hold the board sideways so the USB port is on the right. That's because the model was trained to recognize faces in just one orientation.

Note: The flashtool -e argument is a shortcut for projects in coralmicro/examples/.

You can try it on your board as follows:

To learn how this app runs a TensorFlow model on each MCU core, check out the source code in coralmicro/apps/multicore_model_cascade/. You can also learn more in the guide to create a multi-core app.

You've now experienced the basic workflow, but there's much more to learn about building apps for the Dev Board Micro. We recommend the following next steps:

Also check out the coralmicro source on GitHub.

There are a number of reasons why the flashtool might fail to flash your board or your board might become unresponsive due to a runtime application crash. In almost all cases, these situations are solved by resetting the board into Serial Downloader mode and reflashing the board:

Note: The difference between the two options to start Serial Downloader mode is that the Reset button resets only the MCU, whereas disconnecting all power resets the entire system, which is sometimes necessary.

When the board is running the Serial Downloader, lsusb lists the device as:

Whereas when the board boots normally, the device appears as:

STATE_FLASHTOOL_ERROR or No devices detected

When flashing the board, if the output includes STATE_FLASHTOOL_ERROR right before STATE_DONE, or it says only, No Dev Board Micro devices detected, this is probably because the serial port has failed (the /dev/ttyACM device is not responding).

To solve it, reset the board to Serial Downloader mode and try flashing again.

This usually happens for one of two reasons:

To solve it, reset the board to Serial Downloader mode and try flashing again. (Also see how to connect to the serial console with UART instead of using USB.)

If you see it again stuck at STATE_CHECK_FOR_SDP (it should take less than a second to continue, but will wait 10 seconds for the board to reach SDP), quickly hold the User button and press Reset to manually enter SDP. Then flashing should continue normally.

When flashing the board, if you get a message that says No device found on <device_name>, it might be because your active user does not belong to the necessary group to access the board. Check the group owner by listing the device information. For example, if the device name is ttyACM0:

In the output, the group owner is the 4th column item. For example, "dialout" in this case:

So you must add your username to this group:

Then reboot your computer to apply the group change, and try flashing again.