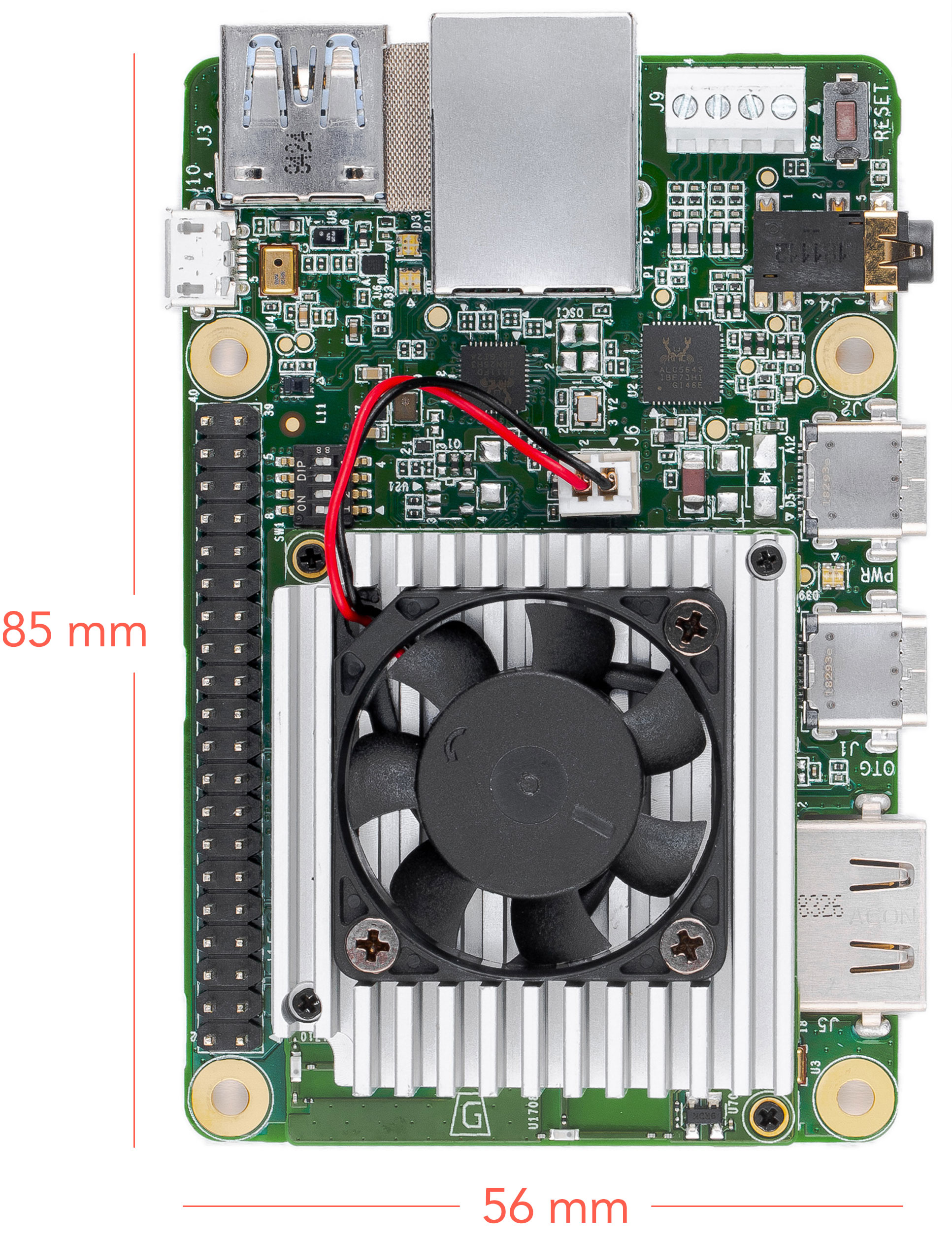 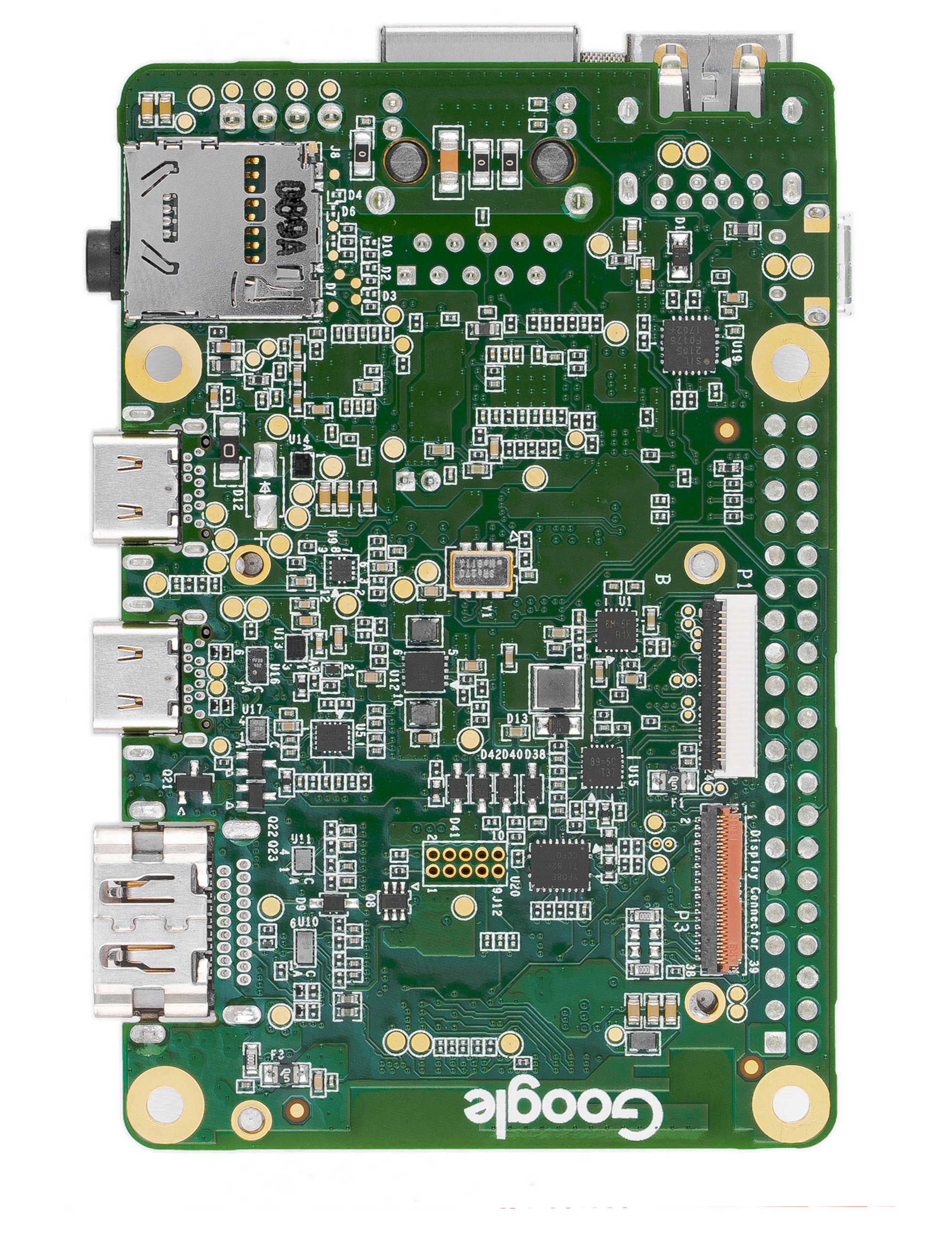 The Coral Dev Board is a single-board computer that's ideal when you need to perform fast machine learning (ML) inferencing in a small form factor. You can use the Dev Board to prototype your embedded system and then scale to production using the on-board Coral System-on-Module (SoM) combined with your custom PCB hardware.

The SoM provides a fully-integrated system, including NXP's iMX 8M system-on-chip (SoC), eMMC memory, LPDDR4 RAM, Wi-Fi, and Bluetooth, but its unique power comes from Google's Edge TPU coprocessor. The Edge TPU is a small ASIC designed by Google that provides high performance ML inferencing with a low power cost. For example, it can execute state-of-the-art mobile vision models such as MobileNet v2 at almost 400 FPS, in a power efficient manner.

Key benefits of the Dev Board:

Figures 1 and 2 illustrate the core components on the baseboard and SoM.

The baseboard on the Coral Dev Board provides a variety of connectors as shown in figure 4.

All I/O pins have a 90k pull-down resistor inside the iMX 8M SoC that is used by default during bootup, except for the I2C pins, which instead have a pull-up to 3.3 V on the SoM. However, these can all be changed with a device tree overlay that loads after bootup.

You can interact with each pin using standard Linux interfaces such as device files (/dev) and sysfs files (/sys). For usage information, see Connect to the Dev Board I/O pins.

Caution: Do not connect a device that draws more than ~82 mA of power or you will brownout the system.

Each UARTv2 module supports the following:

Note: By default, the Mendel operating system configures UART1 for use with the the serial console.

Operates on a frequency of 0-66 Mhz. Provides a 16-bit counter and is optimized to generate sound from stored sample audio images. It can drive motors and generate tones. It uses 16-bit resolution and a 4x16 data FIFO to generate sound.

The micro-USB port (see "serial console" in figure 4) provides access to the serial console based on the CP210x USB to UART Bridge Controller. Only Linux and Mac are officially supported for serial console connections, as follows.

Help! If screen prints Cannot access line '/dev/ttyUSB0', then your Linux user account is not in the plugdev and/or dialout system group. Ask your system admin to add your account to both groups, and then restart your computer for it to take effect.

If you see [screen is terminating], it might also be due to the system groups, or there's something else wrong with screen—ensure all screen sessions are closed (type screen -ls to see open sessions), unplug the USB cable from the Dev Board, and then try again.

Tip: You can also connect to the board via MDT (only with boards running Mendel 3.0 or higher).

By default, the output is locked at a resolution of 1920 x 1080 to avoid GPU pressure and power costs when driving higher resolution displays.

If your display does not support 1920 x 1080, you can change this setting by editing file at /etc/xdg/weston/weston.ini: In the [output] section, edit the line mode=1920x1080 to be a resolution of your choice. You may also delete this line completely, and it will then use the highest resolution supported by the monitor (but doing so can degrade the overall system performance if it is higher than 1920x1080).

There are three USB 3.0 ports:

We recommend using a 4 ohm, 3 watt speaker. A higher ohmage results in a much quieter output.

The stereo terminal is a 4-pin 2.54 mm-pitch terminal connector for stereo speakers. Wire functions are as follows (from left to right, as shown in figure 5):

The MicroSD card meets the SD/SDIO standard, up to version 3.0. It can be used as expanded memory for the system or as the disk for the system image. If the entire system fails, you can use the SD card to reflash U-Boot onto the board (see the flashing instructions).

The MIPI DSI display connector is a 39-pin flex cable connector that provides 4 lanes with resolution up to 1920x1080 at 60 Hz. The connector pinout is as follows.

The MIPI CSI-2 camera connector is a 24-pin flex cable connector that's designed for the Coral Camera. The connector pinout is as follows.

Caution: Do not attempt to power the board by connecting it to your computer.

The SoM has one primary PMIC (BD71837MWV) from Rohm for the iMX 8M SoC complex, LPDDR4, eMMC, and Wi-Fi/Bluetooth. It integrates 8 DC-DC buck regulators and 7 LDOs to provide all power rails required by iMX 8M SoC and commonly used peripherals.

The baseboard includes 4 switches (indicated in figure 7 to control the boot mode. By default, they are set to boot from eMMC. You can change the boot mode as follows.

You can restart the system with the RESET button shown in figure 8.

The Dev Board factory setting includes only the U-Boot bootloader software on the eMMC memory. To use the board, you need to flash the Mendel operating system (a derivative of Debian Linux). For instructions, see the Get started guide.

The Mendel system includes software that's specially-designed for the Dev Board and required to operate the Edge TPU. It also includes Python APIs that make it easy to perform inferences with TensorFlow Lite models.

Caution: Avoid touching the heat sink during operation. Whether or not the fan is running, the heat sink can become very hot to the touch and might cause burn injuries.
Caution: Do not unplug the Dev Board to shut it down. Doing so could corrupt the system image if any write operations are in progress. Instead, safely shutdown the system with the following command:

When the red LED on the Dev Board turns off, you can unplug the power.

The Dev Board has two sets of on-board LED lights: one LED for power status, and a pair of LEDs providing the status of the serial port.

The Ethernet port also has a pair of LED lights.

The LED that provides power status is situated between the Power (PWR) and USB On-The-Go (OTG) ports. It lights up red when the board is powered up and switches off when either power is removed or the main SoC is shut down (for example, when a sudo shutdown command is issued).

The system-on-module (SoM) included with the Dev Board is based on NXP's iMX 8M system-on-chip (SoC) and contains all the essential system hardware, including the Edge TPU and Wi-Fi/Bluetooth radios. It is attached to the Dev Board baseboard with three 100-pin board-to-board connectors.

Note: If you are interested in using the Coral SoM with custom PCB hardware (instead of the baseboard provided with the Dev Board), you can learn more about the standalone SoM in the Coral SoM datasheet.

Figure 9 shows the dimensions of the SoM.

To ensure reliable operation and performance, the board should operate in the following environment:

To maintain functional heat levels the Dev Board includes a heat sink and a fan with the following specifications:

Caution: Avoid touching the heat sink during operation. Whether or not the fan is running, the heat sink can become very hot to the touch and might cause burn injuries.