The Coral Dev Board is a single-board computer that contains an Edge TPU coprocessor. It's ideal for prototyping new projects that demand fast on-device inferencing for machine learning models. This page is your guide to get started.

The setup requires flashing Mendel Linux to the board, and then accessing the board's shell terminal. Once you have terminal access and update some of the software, we'll show you how to run an image classification model on the board.

If you want to learn more about the hardware, see the Dev Board datasheet. 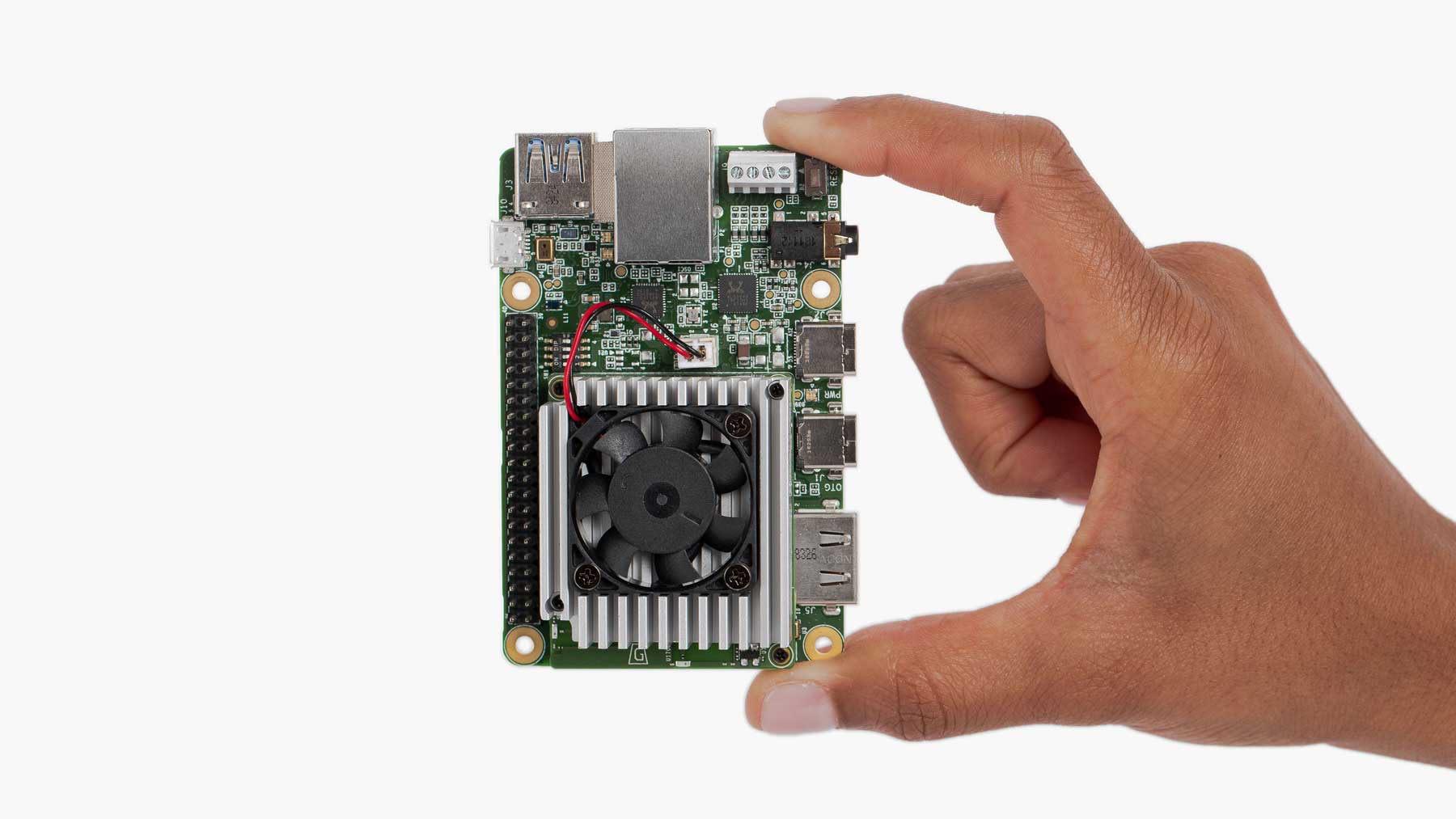 Warning: Use caution when handling the board to avoid electrostatic discharge or contact with conductive materials (metals). Failure to properly handle the board can result in a short circuit, electric shock, serious injury, death, fire, or damage to your board and other property.

Note: Do not power the board or connect any cables until instructed to do so.

Before you begin, collect the following hardware:

Note: Although you can connect a keyboard and monitor to the board, we do not recommend it because the system is not designed to operate as a desktop environment and doing so can affect the system performance. So our documentation emphasizes use of a terminal when interacting with the Dev Board (either with the serial console or SSH).

However, as of Git for Windows v2.28, the Git Bash terminal cannot directly access Python. So after you install Git Bash, open it and run the following commands to make Python accessible:

The Dev Board's factory settings do not include a system image (it includes only the U-Boot bootloader), so you need to flash the board with Mendel Linux.

Caution: This procedure is intended for new boards only. If you already installed Mendel, this deletes all system and user data—if you want to keep your user data, instead see the guide to flash a new system image.

To flash your board using the microSD card, follow these steps:

While the board boots up, you can install MDT on your host computer.

MDT is a command line tool that helps you interact with the Dev Board. For example, MDT can list connected devices, install Debian packages on the board, and open a shell terminal on the board.

You can install MDT on your host computer follows:

You might see a warning that mdt was installed somewhere that's not in your PATH environment variable. If so, be sure you add the given location to your PATH, as appropriate for your operating system. If you're on Linux, you can add it like this:

Windows users: If you're using Git Bash, you'll need an alias to run MDT. Run this in your Git Bash terminal:

4: Connect to the board's shell via MDT

Mac users: Starting with macOS 10.15 (Catalina), you cannot create an MDT (or other SSH) connection over USB. However, MDT does work over your local network, so follow the instructions to use MDT on macOS (return here to complete the setup).

Now that you have the Mendel system on the board, you can initiate a secure shell session using the MDT tool. Using MDT is just an easy way to generate an OpenSSH public/private key pair, push the public key onto the board, and then establish an SSH connection. (You should have already installed MDT on your host computer, as per the above requirements.)

First, connect a USB-C cable from your computer to the board's other USB port (labeled "OTG").

Now make sure MDT can see your device by running this command from your host computer:

You should see output showing your board hostname and IP address:

If you don't see your device printed, it's probably because the system is still setting up Mendel. So instead run mdt wait-for-device. When your board is ready, it will print "Found 1 devices."

Note: Your board's hostname is randomly generated the first time it boots from a new flashing. We do this to ensure that each device within a local fleet is likely to have a unique name. Of course, you can change this name using standard Linux hostname tooling (such as hostname).

Now to open the device shell, run this command:

After a moment, you should see the board's shell prompt.

Note: You must connect to the board via MDT over USB at least once before you can SSH via any other method. Using USB allows MDT to generate an SSH public/private key pair and push it to the board's authorized_keys file, which then allows you to authenticate with SSH. (Using MDT is just easier than manually copying the key over the serial console.)

For more information about what you can do with MDT, read about the Mendel Development Tool.

5: Connect to the internet

You'll need the board online to download system updates, models, and samples.

Either connect an Ethernet cable to the board or select a Wi-Fi network by running the following command in the device shell:

Then select Activate a connection and select a network from the list under Wi-Fi (wlan0).

Alternatively, use the following command to connect to a known network name:

Verify your connection with this command:

You should see your selected network listed in the output. For example:

The DEVICE name is wlan0 for a Wi-Fi connection or eth0 for an Ethernet connection.

Some of our software updates are delivered with Debian packages separate from the system image, so make sure you have the latest software by running the following commands.

Now you're ready to run a TensorFlow Lite model on the Edge TPU!

Note: The dist-upgrade command updates all system packages for your current Mendel version. If you want to upgrade to a newer version of Mendel, you need to flash a new system image.

For a video demo of the Edge TPU performance, run the following command from the Dev Board terminal:

You should then see a video playing in your browser. The footage of the cars is a recording, but the MobileNet model is executing in real time on your Dev Board to detect each car.

Or if you have a monitor attached to the Dev Board, you can instead see the demo on that screen:

Caution: Avoid touching the heat sink during operation. Whether or not the fan is running, the heat sink can become very hot to the touch and might cause burn injuries.

The demo above is rather complicated, so we've created some simple examples that demonstrate how to perform an inference on the Edge TPU using the TensorFlow Lite API (assisted by the PyCoral API).

Execute the following commands from the Dev Board shell to run our image classification example:

To demonstrate varying inference speeds, the example repeats the same inference five times. It prints the time to perform each inference and then the top classification result (the label ID/name and the confidence score, from 0 to 1.0).

To learn more about how the code works, take a look at the classify_image.py source code and read about how to run inference on the Edge TPU with Python.

Note: The example above uses the TensorFlow Lite in Python, but you can also run an inference using C++. For information about each option, read the Edge TPU inferencing overview.

If you got the Coral Camera, see the guide to connect a camera to the Dev Board.

To run some other types of neural networks, check out our example projects, including examples that perform real-time object detection, pose estimation, keyphrase detection, on-device transfer learning, and more.

If you want to train your own TensorFlow model for the Edge TPU, try these tutorials:

If you'd like to browse the Mendel source code and build it yourself for the Dev Board, take a look at the Mendel Getting Started guide.

Caution: When you're done with the Dev Board, do not simply unplug the Dev Board. Doing so could corrupt the system image if any write operations are in progress. Instead, safely shutdown the system with the following command:

When the red LED on the Dev Board turns off, you can unplug the power.