The setup guide for each Coral device shows you how to install the required software and run an inference on the Edge TPU. However, our pre-built software components are not compatible with all platform variants. If your host platform is not listed as one of our supported platforms (see the "requirements" in the product datasheet), you'll need to build the required components yourself (either natively or in a Docker/cross-compilation environment).

Building these components might be necessary if your system matches some of the requirements for our pre-build components (such as the Python version) but not others (such as the Debian version). Other examples of when it makes sense to build on your own include if you want to use a specific TensorFlow version or run on a Linux system that's not Debian-based. We can't possibly build for every scenario, and in some situations it's easier for you to build the libraries and APIs yourself instead of trying to change your system to match the platforms that we support.

This document describes how to build everything you need to run the Edge TPU as well as how to integrate and test the components.

Note: This page does not describe building Mendel for the Coral development boards or SoM. To build Mendel, instead see the Mendel Getting Started guide.

You need the following software components to run inference on the Edge TPU:

And we recommend you write your application with one of the following API libraries:

Normally, you can install the pre-built version of these components (except libcoral) by following our device setup guides or downloading them from our downloads page. But to build them for your own platform, you'll need to follow the steps in the following sections.

There are a few things you need to decide on and verify before beginning this process:

To install our pre-build Edge TPU runtime, you can run sudo apt install libedgetpu1-std (or libedgetpu1-max in the case of maximum frequency for USB). That package contains the shared library (libedgetpu.so.1), and you can then dynamically link your project with libedgetpu.

To build it yourself, first clone our libedgetpu repo.

Next, configure the bazel workspace to use the TensorFlow commit you have in mind. For example, if you want to use TF v2.3.0 - as of this writing that tag corresponds to commit b36436b087bd8e8701ef51718179037cccdfc26e (determined from TF Release Tags). So insert that as the TENSORFLOW_COMMIT value in the workspace.bzl file.

A checksum is also required for the TF package that you'll download. You could curl the object and compute this, or simply leave it for now, let it fail, and wait for the correct value to be reported.

If you're building natively, just run the Makefile:

If you want to cross compile or use a known-good Docker container (which allows compilation of multiple CPU architectures), you can follow the libedgetpu README.

In any scenario, the output will be found in the out folder, as shown here:

To deploy the library, copy this into your /usr/lib/. This exact location may vary by system, but commonly you can move it as follows (for a x86_64 system):

For usage information, see how to use the TF Lite Interpreter with libedgetpu.

To install our pre-built TF Lite runtime (tflite_runtime), you can get it from Pip as per the Python TF Lite quickstart.

To build it yourself, you first need to checkout the TensorFlow repo:

Remember that you must checkout the same TensorFlow version that you used for the TENSORFLOW_COMMIT value when building the Edge TPU runtime.

The instructions that follow are the latest as of this publishing (and simplified). For a more thorough procedure and the latest documentation, you should see the build instructions in the TensorFlow repo. In that documentation, you'll see both build_pip_package.sh and build_pip_package_with_bazel.sh. While both work, we recommend the Bazel option (it doesn't require additional host dependencies) as follows.

To cross-compile, see the steps at the build instructions in the TensorFlow repo.

To deploy, simply use pip to install (for version 2.4.0 in this case):

If you want to use the libcoral C++ API for development, you need to compile the library with your project using Bazel. For details, see the README in the libcoral repo.

The following commands show how you can get the code, build it, and install it. Beware that the pycoral repo includes both libcoral and libedgetpu as submodules, and by default, the pycoral WORKSPACE file defines the TENSORFLOW_COMMIT that is passed through to those libraries to ensure they're using the same TensorFlow version.

For usage information, see Run inference on the Edge TPU with Python.

This API is deprecated: You should instead use the PyCoral API.

The Edge TPU Python API has a swig-based native layer so an architecture-specific build is required. Using build_swig.sh provides support for ARM64, ARMv7, and x86_64 for Python 3.5, 3.6, 3.7, and 3.8 (note that only one wheel is generated supporting all of these).

Before you build the library, edit the WORKSPACE file at the root of the repository to specify the TENSORFLOW_COMMIT, using the same value you used when building the Edge TPU runtime.

To build it yourself, follow the steps in the edgetpu repo.

This is required only for PCIe devices such as the Accelerator Module and Mini PCIe or M.2 Accelerator cards.

To get our pre-build PCie driver, you can get it from a Debian package (gasket-dkms), as per the getting started guide. This package requires the appropriate kernel headers for your device, in which case it will use DKMS to install the module into your kernel when the package is installed.

You also need to add the config CONFIG_STAGING_APEX_DRIVER to your kernel config to ensure this is built. For example (building into the kernel, set to "m" for a module):

Then build your kernel as you usually would and deploy it to your device.

After you'd deployed all the necessary components as shown above, you can test it by running this classification demo on your device:

You should see a result like this (note the speed will vary based on the interface used):

The following are some common errors you might encounter.

Failed to load delegate from libedgetpu.so.1

Failing to load the delegate is a very general error that can indicate a few issues such as the following.

The runtime isn't installed: To verify your runtime is installed you can use Python's ctypes, which is what loads the library.

The Edge TPU isn't available: This error will also manifest if the device can't be found.

The output should show 1a6e:089a Global Unichip Corp. If not, the device isn't available over USB. Check the connection and your dmesg output to see if there was a kernel error preventing communication.

The output should yield (assuming only one TPU) /dev/apex_0. If there is no Apex device, check your dmesg output and see PCIe errors.

After running a TF Lite model through the Edge TPU Compiler, everything that is mapped to the Edge TPU is placed in a single op (edgetpu-custom-op). This means that if the model fully runs on the Edge TPU, the entire model is in this operation and input/output: 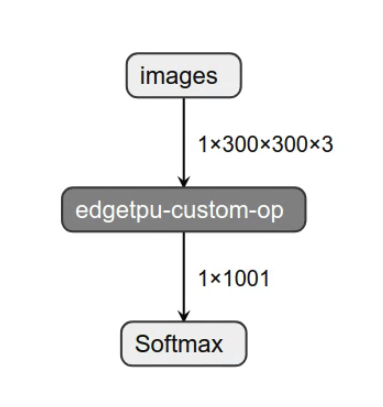 In order to run properly, this edgetpu-custom-op must be properly handled. So this error indicates that the delegate has issues running with the current setup. There is a mismatched version between one of the following:

If building everything (as described in this document), the key is ensuring that each component was built using the same TensorFlow commit.

It is also possible that the model was compiled using a new Edge TPU Compiler but the runtimes are an older version (for example, using a TensorFlow commit that is for TensorFlow 1.15 but then using the latest Edge TPU compiler).

If you've confirmed that the built packages use the same TensorFlow commit, the next step is to try a model from coral.ai/models/. If these models don't work, you likely need to pick a more recent TensorFlow commit (keep in mind the compatibility layer can provide most 1.x API in TF 2.x). If the website models work but your model doesn't, please contact coral-support@google.com to help evaluate the compilation issues.